A Reuben for my Ruben

My oldest son is named Ruben. We spell it the Spanish way to be all trendy and alternative, although we prefer to tell people that Ruben is named after a Cuban musician.
But here’s a secret: I really named him after my one of my favourite sandwiches, the Reuben.
Trust me to name my child after a menu item.

So… I was talking about this very sandwich a few weeks ago with Ruben and he told me that he had never tried one!
!!!!!!!!!
WHAT? What kind of mother am I? I threw myself on the ground to beg his forgiveness and swore a dramatic oath that I would make him a Reuben forthwith. Fortunately, Ruben is used to my histrionics and calmly said, “Sure, it would be nice to try one.”

(It turns out, after some serious discussion with hubby about our lack of parenting prowess, that we did actually take Ruben out for a Reuben when he was four years old, but he didn’t like it – “spicy” he said – and doesn’t remember the incident. Actually, ok I admit, it’s not true – he does remember, but I don’t want to remind him that the “spicy” sandwich and the Reuben are one and the same.) 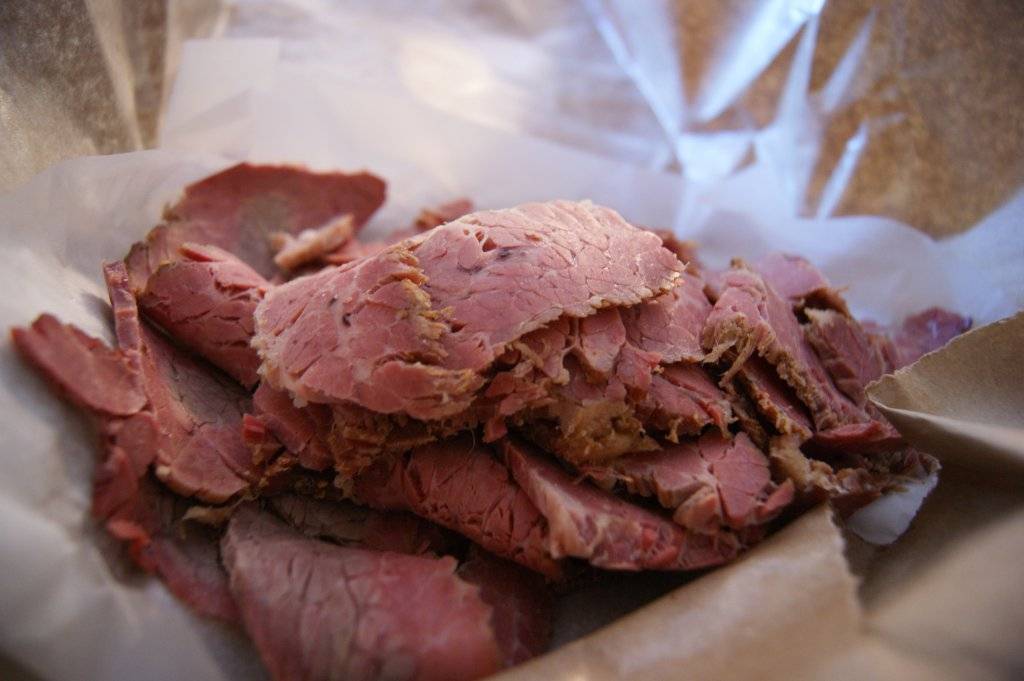 The quest for Ruben’s Reuben ended almost as soon as it started. If you can believe it, the very next day I saw some house-made corned beef at my favourite little charcuterie place, Choux Choux! For me, to see yummy food is to buy yummy food (unfortunately – See my various posts on Operation Use-it-Up if you don’t believe me) and to buy is to plan a meal which requires more buying! After a quick detour to WildFire Bakery to find out that they were sold out of their sourdough rye (but still managing to pick up several other loaves of bread and six giant ginger cookies), I went to the supermarket to buy some ordinary rye and also picked up some horseradish dijon, kiwis (on sale!) and muesli (new product!) while I was there. Thank the heavens that I already had both sauerkraut and gruyere cheese at home, or I may have been forced to stop somewhere else to buy some more unnecessary food.

For dinner that night we had homemade Reuben Sandwiches with all the good stuff.

Ruben’s verdict? “High Five, Mom!”
His only complaint? “It needs more of that spicy mustard.” 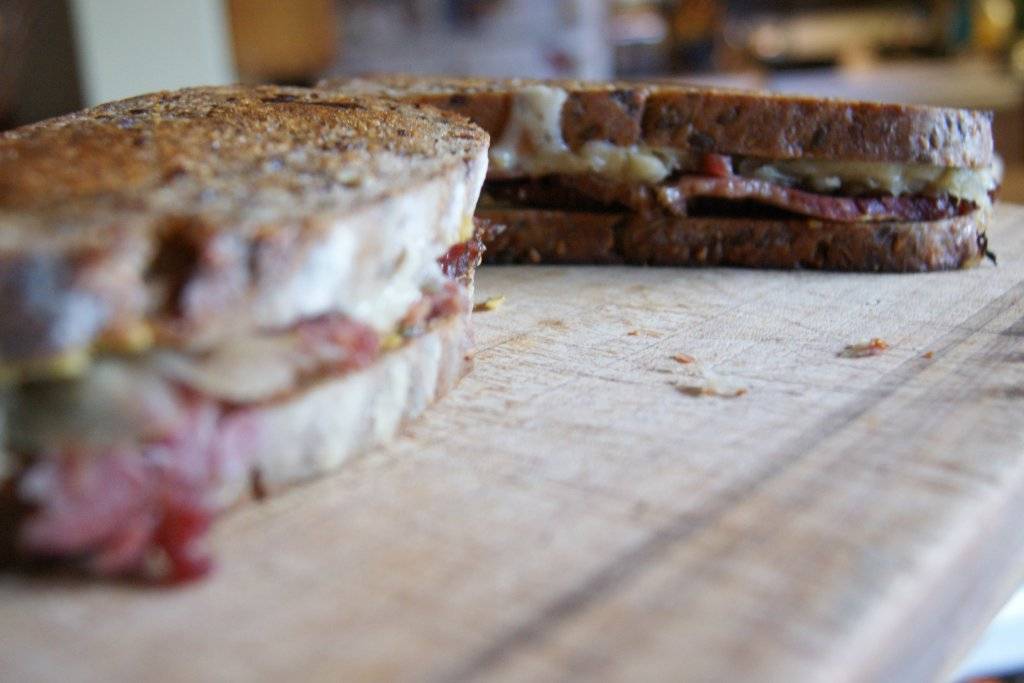 instructions
1. Start heating two 10-inch round heavy skillets or cast iron pans over low heat while you assemble the sandwiches. Have ready two large pot lids and a good flipper (aka metal spatula). 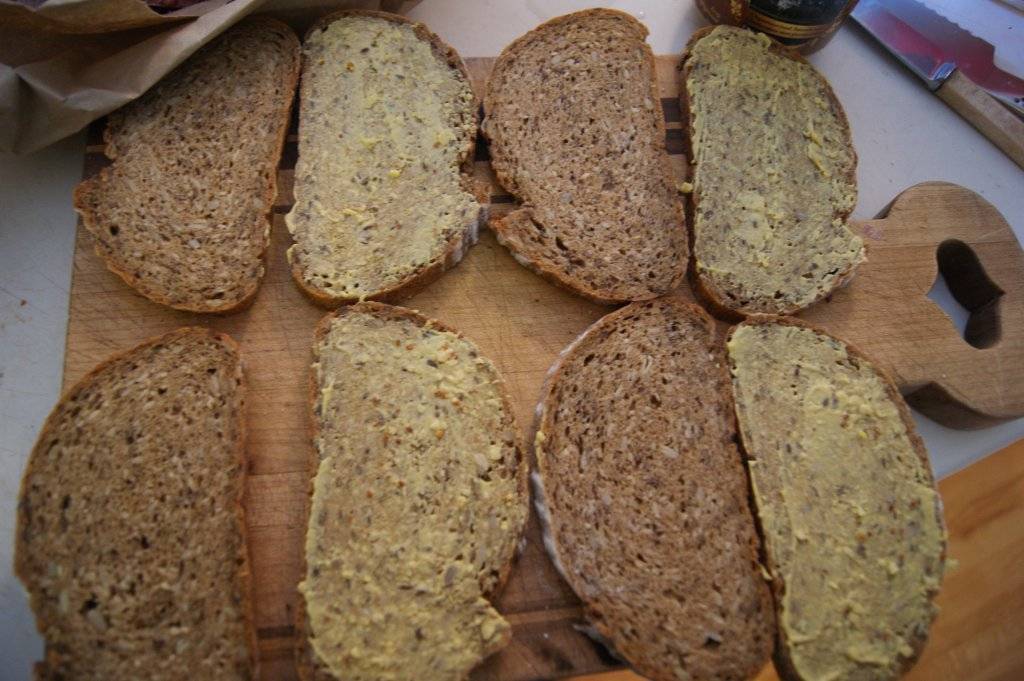 3. Butter the outside (top) sides of the top pieces of bread. Now place the remaining butter in the pans to melt (this will end up “buttering” the bottom slices of bread). If the pans are not very hot, you can turn them up to medium-low but remember to keep the pan from getting too too hot! If the pan is too hot, the bread will burn badly before the beef and cheese are warm and melty.

4. Carefully place the sandwiches, two in each pan, buttered sides up. Cover the pans with the lids. Let the Reubens cook until the cheese has started to melt and the bottom pieces of bread are golden brown – about 3 to 5 minutes on lowish heat. Now, using your metal flipper, carefully flip the sandwiches over. Replace lids and cook until the beef is heated through, the cheese has fully melted and the second side of bread is golden brown. Remove sanwiches to a cooling rack to rest for a minute or so before cutting each in half with a sharp knife.

5. Reubens are fantabulous served with thick-cut oven fries, coleslaw, pickles and a big giant milkshake. But we had to make do with some plain veggie sticks that day, woe is me. 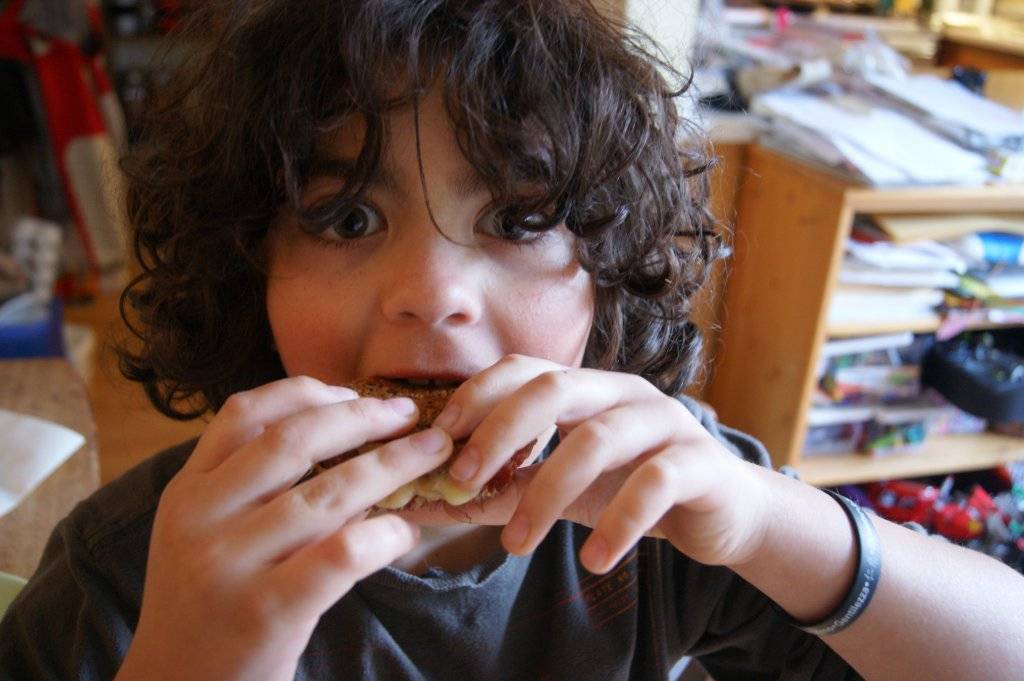