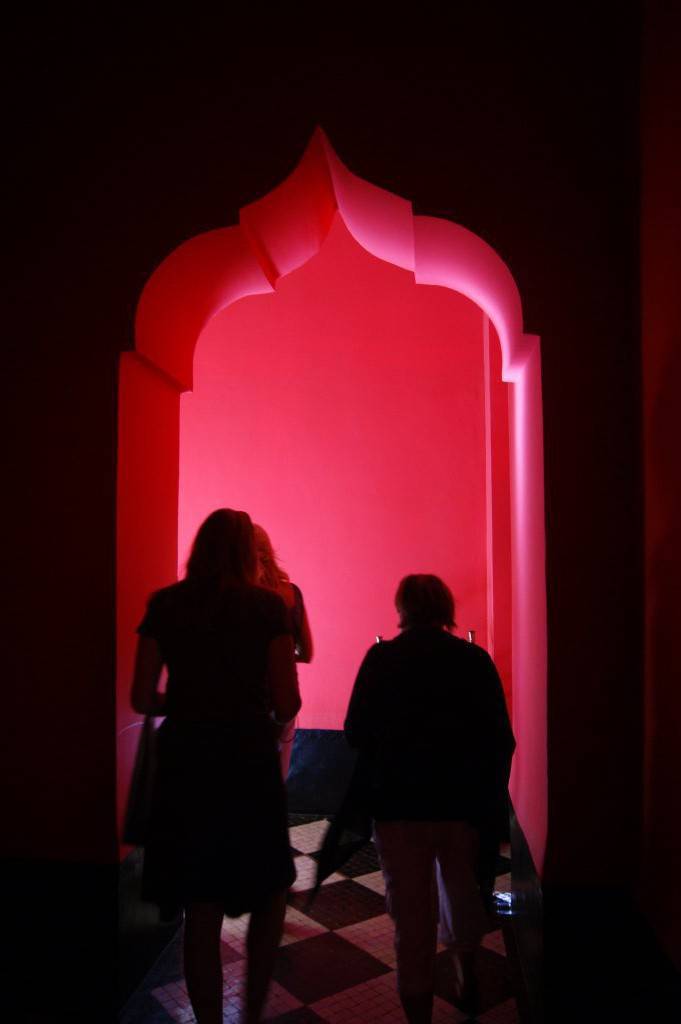 One notable thing about my European trip has been the lack of consistent internet connection anywhere. It’s freed up a bit more time for eating and enjoying myself but left me feeling guilty about my blog followers back home who have been waiting for the latest update. I keep telling myself you don’t want to hear it anyway – all that travel taunting – but I know that is not really true. I think.

Today I am staying at a friend’s place in northern Italy and she has rigged up some kind of amazing internet connection through her cell phone, for now, and I am hoping to at least write about The Day of The Moroccan Cooking Classes. 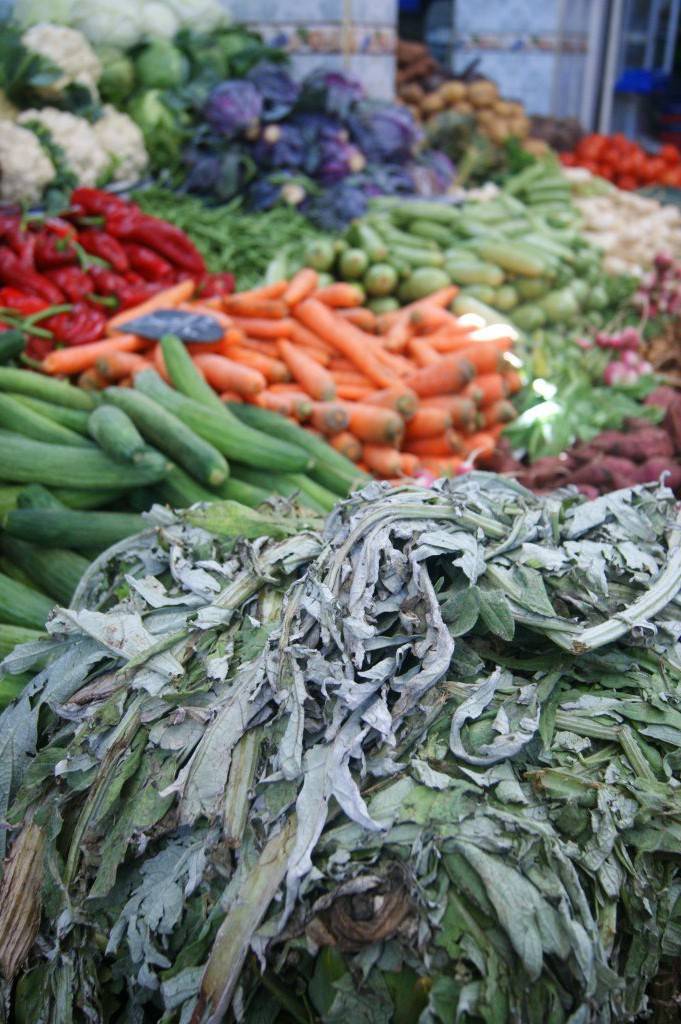 cardoons and other vegetables at the souk (market)

On our last day in Marrakech, a week ago, a lifetime ago, we were treated to two separate cooking classes. One, an impromptu and intimate lesson in making msemen (pan-fried breakfast bread) from the morning baker at our hotel, and two, an amazing market tour and hands-on cooking class guided by Chef Hafid of the classy Riad El Fenn. For a travel tour that had involved so much good food, we hadn’t had as many detailed cooking classes as we expected, so this day was a highlight for me. 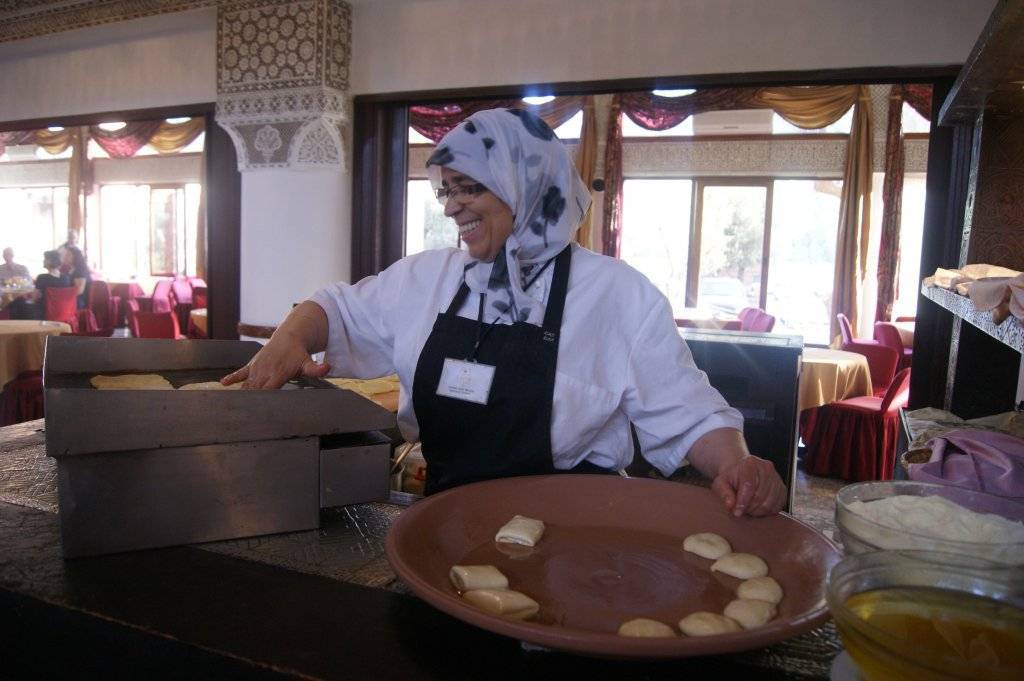 Cooking Class One: Msemen
I had been eating msemen every day in Morocco (and even a couple of times in southern Spain) and I wanted to learn how to make it very badly. Msemen tastes like a cross between soft buttery Indian paratha and flakey phyllo pastry. (Yes, I know, now you want to learn how to make it, too. I will be testing out the recipe after I get home, don’t you worry.) Now, just imagine how good they taste fresh off the griddle and topped with perfect creamy French butter and local apricot jam! 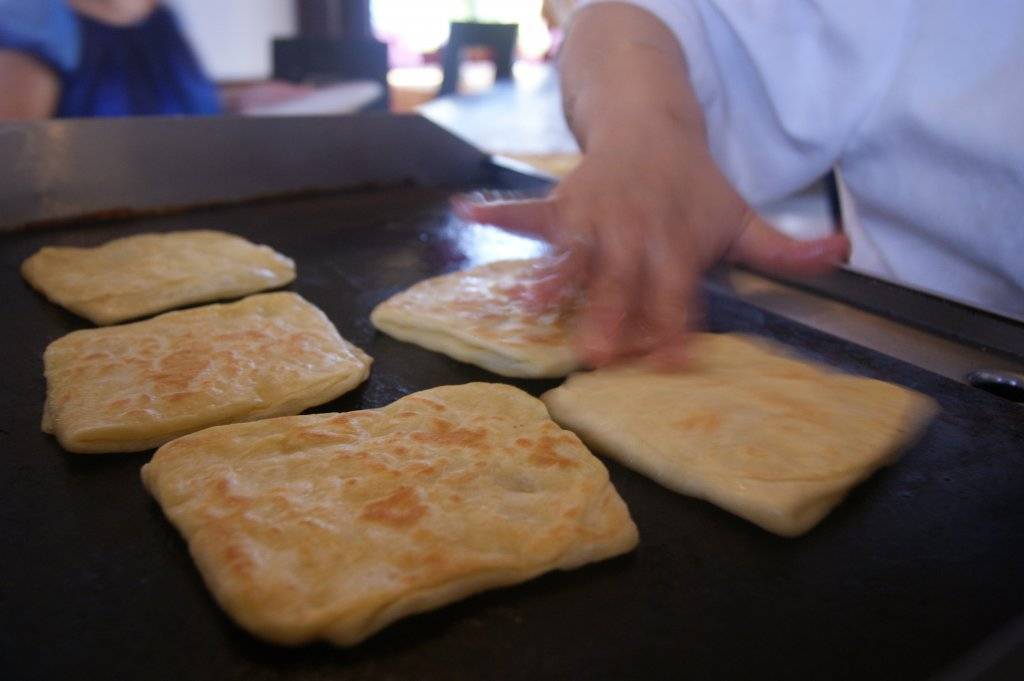 Msemen on the griddle

At our hotel in Marrakech, the msemen was made in full view of the dining room, fresh to order, by a lovely baker named Malika. Several of us die-hard foodies from the tour group approached her with smiles and cameras to ask all about the process of making msemen. Instead of telling us to flake off cause she was obviously busy, Malika patiently explained the process, and demonstrated the technique of rolling out and folding the dough to achieve the appropriate flakiness. Between my French and hers, we were able to decipher the correct amounts of semolina flour, oil, and water to make a batch of msemen for 300. All before breakfast – which was, of course, a fresh, crispy-tender, flaky msemen, pulled off the griddle for us by a smiling Malika. 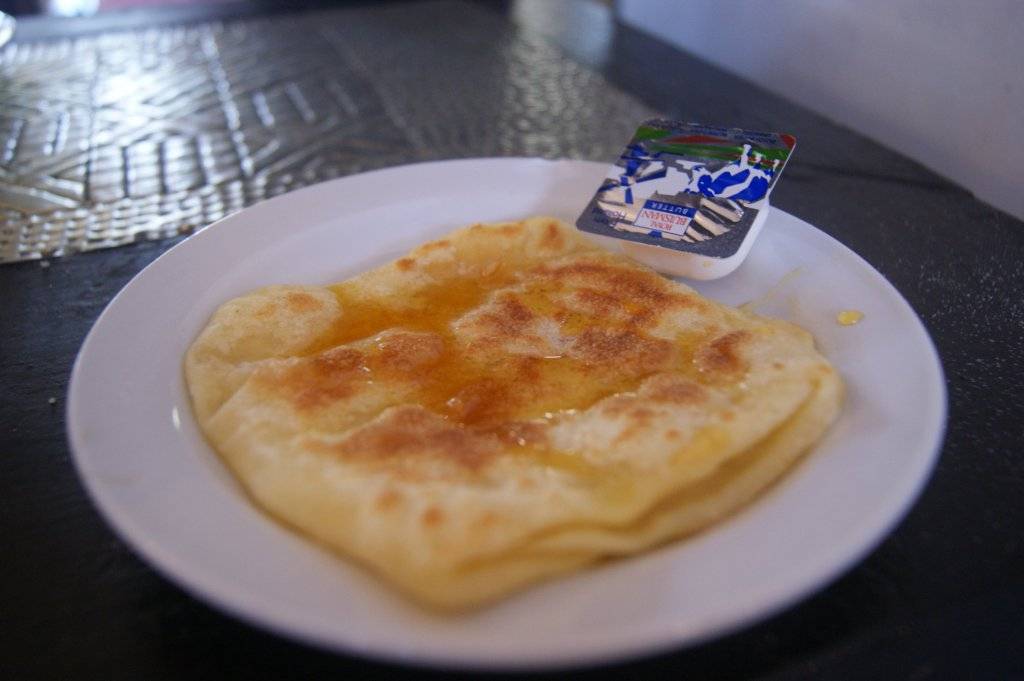 Cooking Class Two: market tour, tagine, and pastilla
I don’t know what possessed us to ask for a lesson in pastilla from Chef Hafid. Probably because the few pastillas we had tried in Morocco were delicious and exotic in a way unmatched by even the beef-cinnamon-prune tagines. The pastry was so resilient yet so shatteringly flaky, the fillings were so sweet yet so savoury. 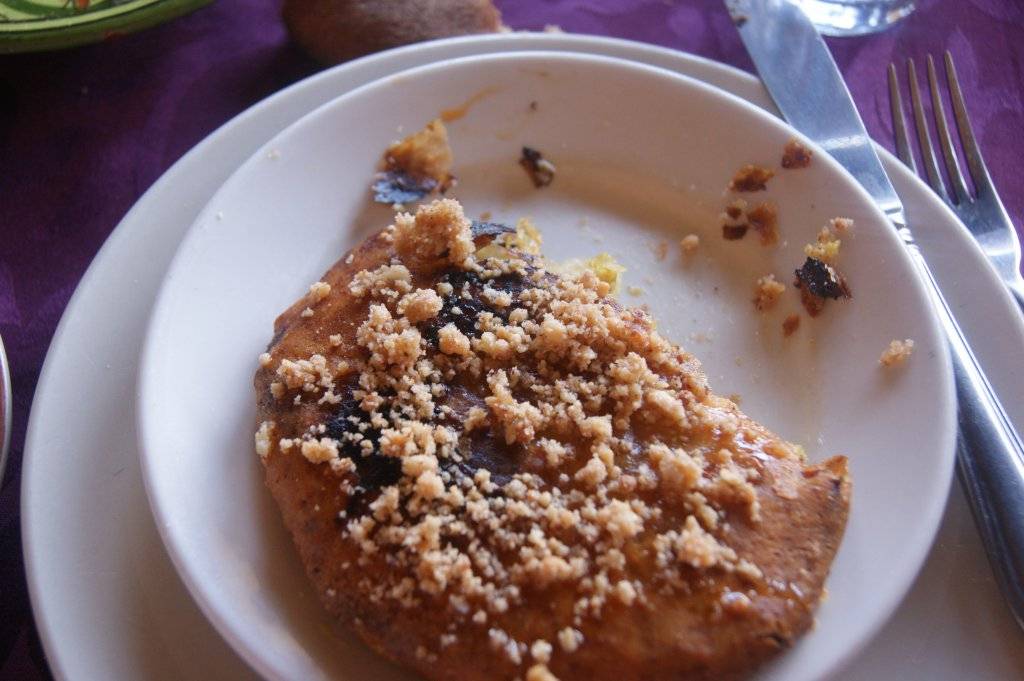 Eating pastilla (a round pastry filled with sweet spiced chicken and eggs) is like taking a trip back to the Middle Ages and we wanted to know how it was done. But by the time Chef had taken us on a market tour and then taught us to make lamb tagine, fish tagine, and quail pastilla, our cooking class had run overtime by at least two hours. I didn’t hear any complaints, though, as we sat up on the shaded terrace with a view of the walled city on all sides, and tucked into the best meal we ate in Morocco. 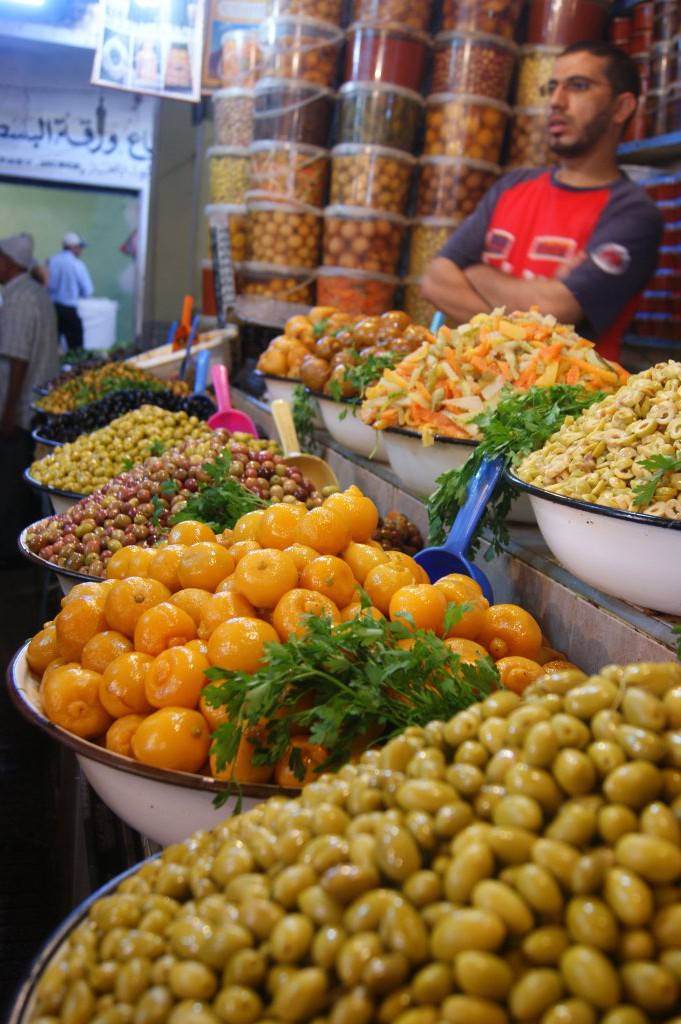 But first, the market tour. We went into the souks (a very cool-sounding term for markets). The souks are divided into themes, i.e., cloth, tannery, spices, etc. The food souk was noisy, smelly, and a feast for the eyes: it smelled richly of spices, animals, olives, fruits;  it was hung with fresh meat and piled with gorgeous vegetables and fruits; a man chased some loose chickens through the stands; preserved lemons and green olives for the asking were sitting in big bowls; in other words, the food souk was completely awesome. I wanted to stay there all day, haggling for spices, looking at enormous quince, and watching the process for making pastilla pastry. 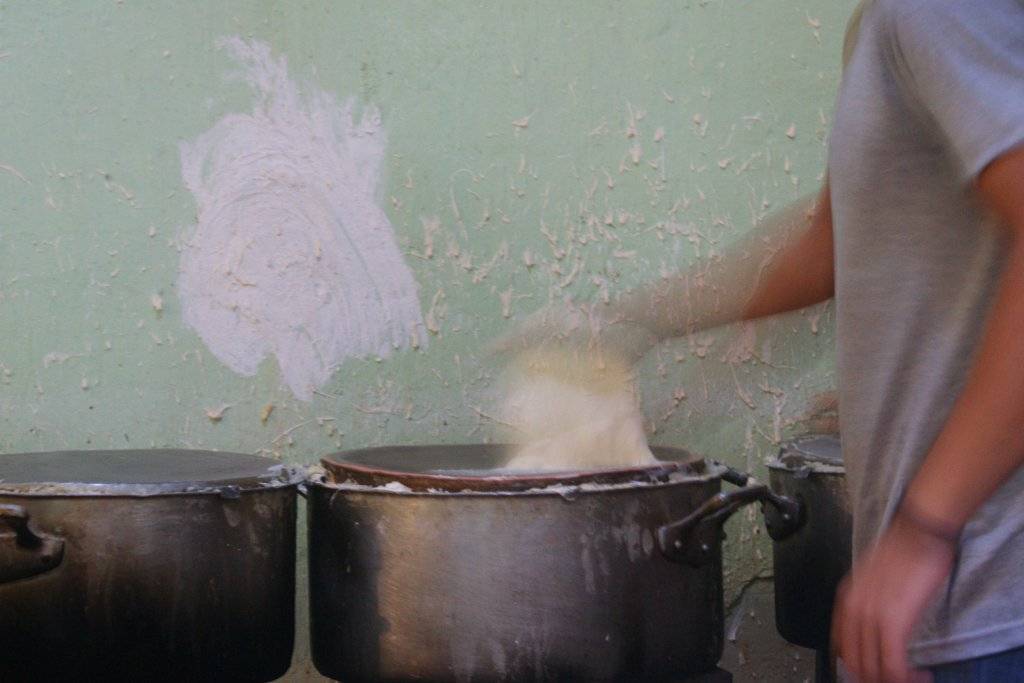 The pastry dough (flour and water only, I guessed) was mixed in a big drum. Two young men worked in tandem over three big round griddles to make the thin sheets of pastry. One man grabbed a lump of the (very wet) dough and rubbed it around on one of the griddles until a film of dough covered the surface. When it was judged to be cooked (about one minute later) the second man would peel it off and flip it onto the counter, where it was brushed liberally with oil. The process continued and the pastilla sheets were stacked one on top of the other. 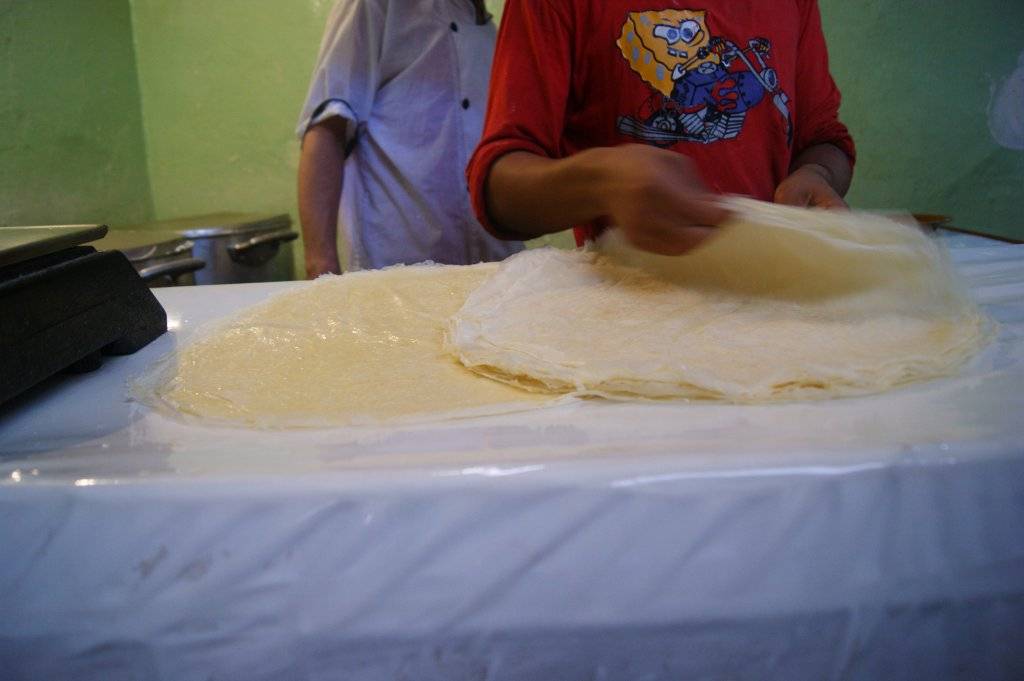 Chef Hafid bought about a dozen sheets and had them packed in a plastic bag. The pastry looks very much like a pliable phyllo, only I know from tasting it that pastilla pastry is more resilient, almost like a very very thin sheet of pasta or spring roll pastry. I am not sure that pastilla pastry can be replicated at home and I have to say that I was relieved to see that even a professional chef in Morocco relied on ready-made pastilla pastry. 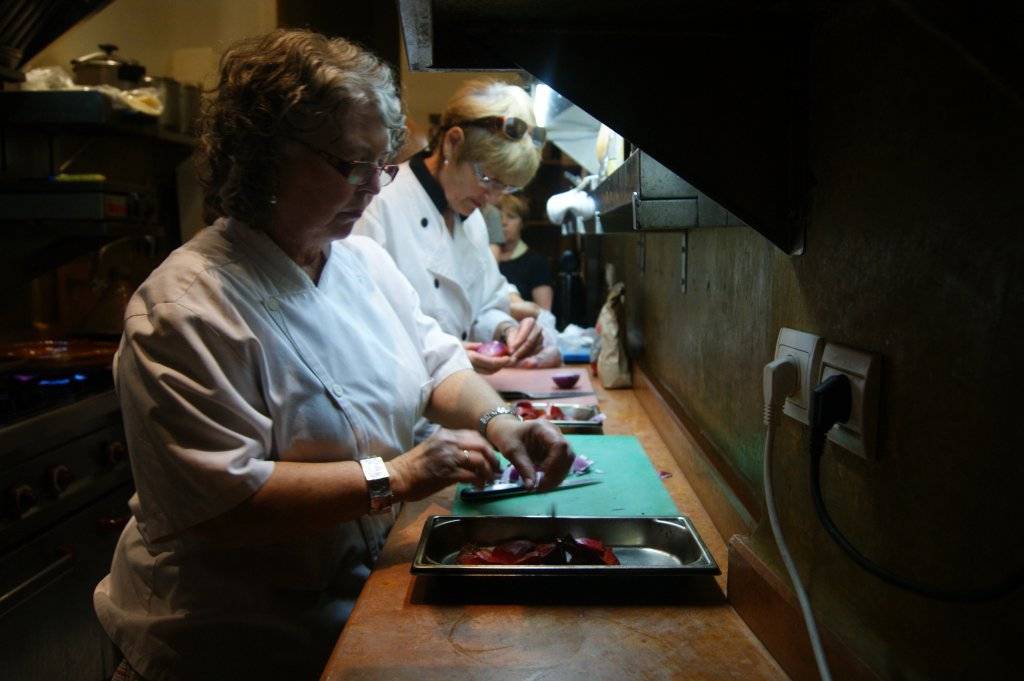 After our market tour, we went back to the Riad to make our meal. Chef Hafid dressed many of us in chef jackets and set us up chopping red onions and smashing garlic. He worked like a dervish himself, thawing out quail, peeling and slicing vegetables, browning lamb, measuring spices, all the while explaining what he was up to. My favourite was his description of the amounts used: “too much paprika” and “too much coriander [cilantro]” he would say with a wide smile, as he practically shoveled brilliant red fragrant paprika into the fish marinade. He was also busy making the staff lunch on a back burner: a whole calf head simmering in a spiced broth to make a rich soup. I confess to peeping in the pot more than once. I can figure out how to make a tagine, but calf-head soup…! 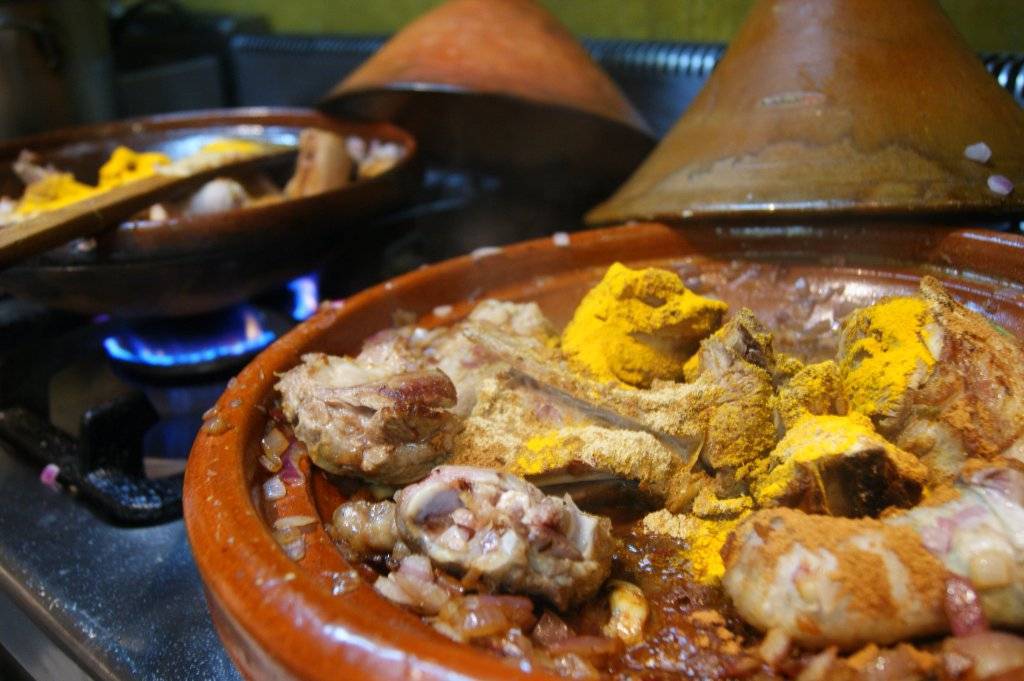 The tagines he made were superb – the best we had eaten. The fish tagine, in particular, was spectacular and not something we had tried before. Rich with garlic, lemon, paprika, and fresh cilantro, layered with vegetables… all of the fish-eaters were thrilled. But the best was the pastilla. 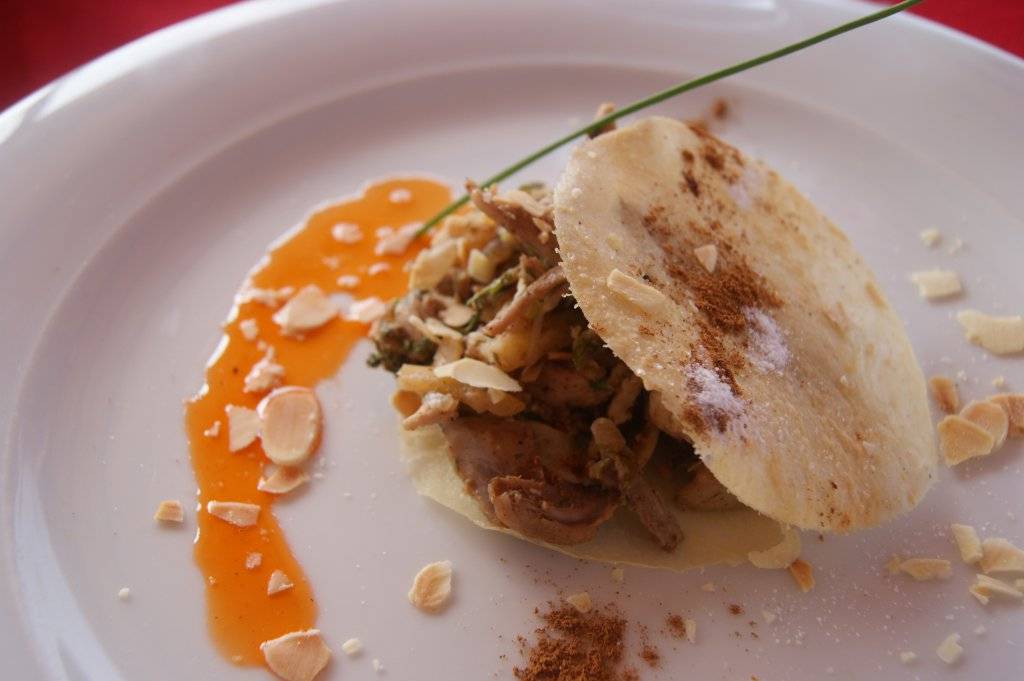 He made a “de-constructed” pastilla which looked a lot more fancy schmancy than the regular pastillas, but which Chef Hafid assured us were in fact much easier. He used poached and spiced quail meat and browned vegetables with a Fanta reduction sauce (yes, Fanta!). And he added sauteed quince!!! I will have to do a whole post about quince one of these days. Quince is one of my favourite fruits, but not many people have eaten them back home. The quince that is available in Canada is small and very hard – they can only be eaten cooked. The quince in Morocco is huge and soft enough to eat raw. I munched on raw quince and passed some around while Chef finished the pastilla. People were hungry enough by then that they would have taken anything I had offered, but I will continue to pretend that they were all as thrilled about the quince as I was. 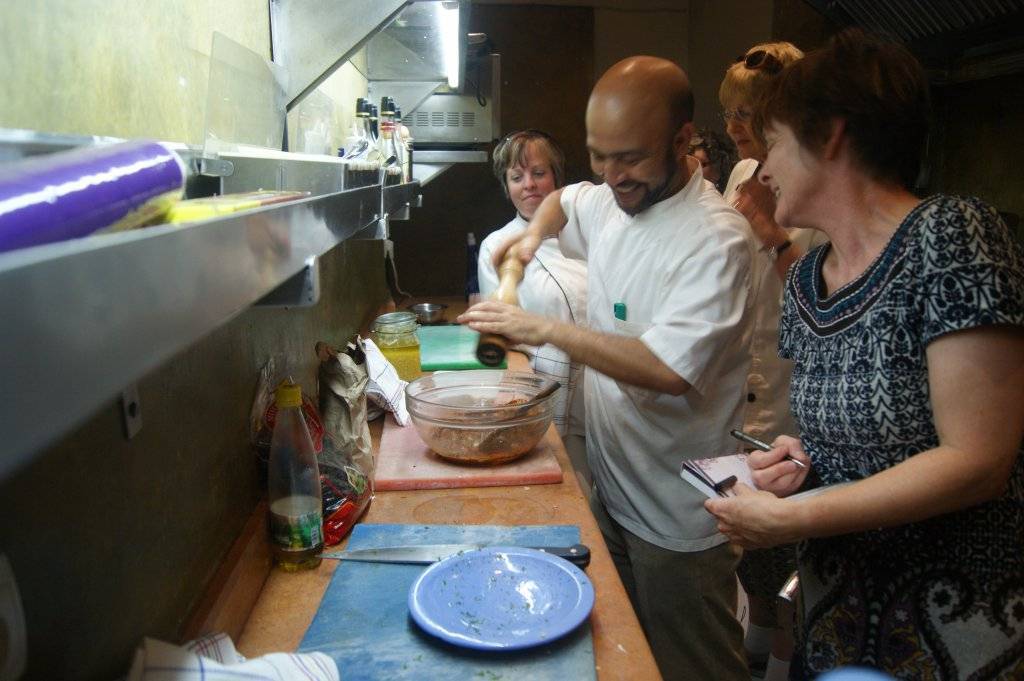 So in a single day I learned the secrets of many Moroccan delights: msemen, pastilla pastry, real tagine, and how to haggle for spices in a smelly awesome food souk. This last served me well when I went out to buy spices later in the souks. Trivia question not entirely unrelated to cooking classes: how much money did I spend on spices on my trip to Morocco? 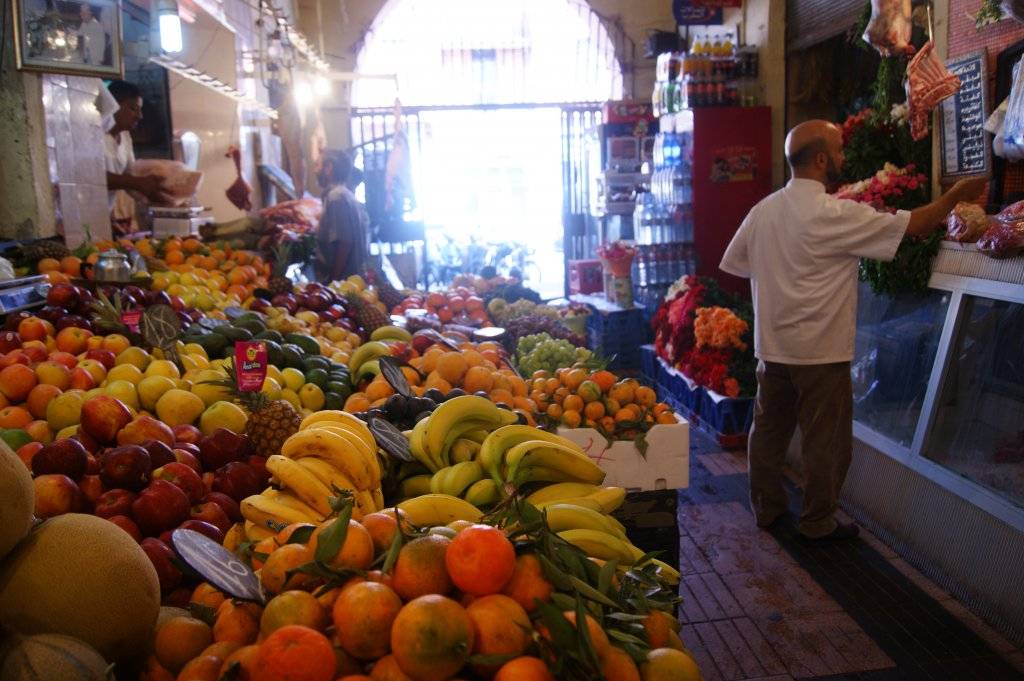 This month's issue of @eatmag features one of my v