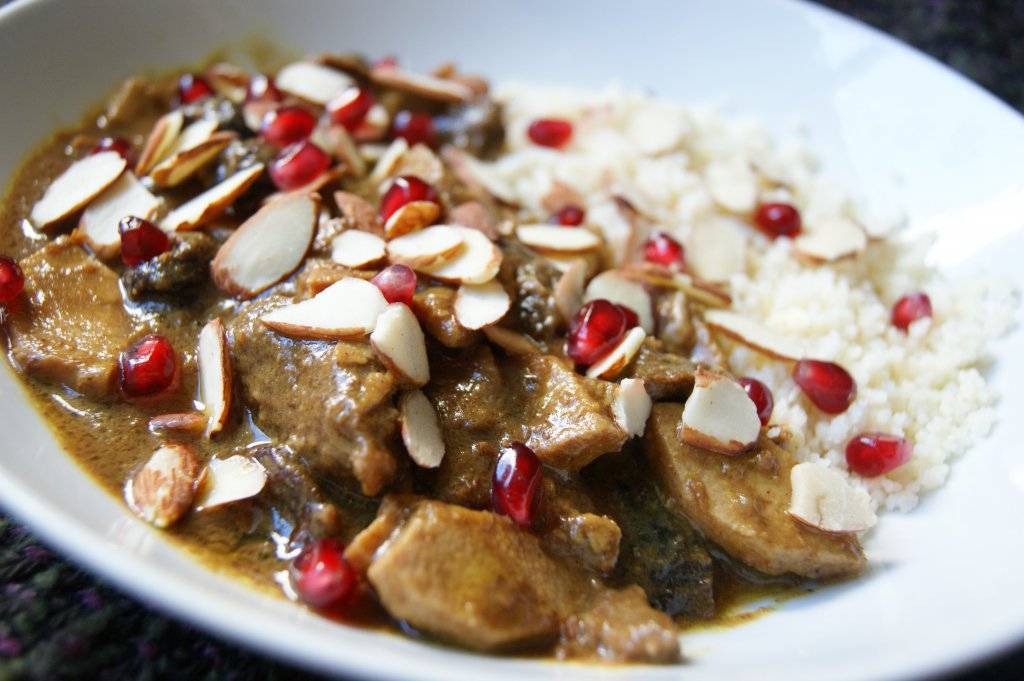 I am excited about today’s blog post for at least three reasons:

2) lamb (or more specifically, organic mutton from Terra Nossa, which tastes better than any lamb I have ever tasted)

This Moroccan Lamb Tagine recipe is still in the refining stages. In Heidi-speak, that means that a draft of the recipe sits on my desk for 6 to 18 months, doing nothing and inspiring no one.  Until I get the opportunity to test it a third or fourth time and perfectly refine the spicing, the cooking time, what have you. Blerg.
Instead, I’ve decided to bust out the recipe a bit early on the blog in honour of both the winter season (perfect for tagines!) and the Moroccan cooking class discount giveaway I will tell you all about before this post is through.

But first, can we talk a minute about mutton? Mutton is any lamb over 6 months old, and often much older. It has a reputation for toughness, gamey-ness, and many other undesirable culinary qualities. In fact, I grew up in a house where even lamb was verboten because of mutton’s fault! My father had been fed old mutton as a child in post-war Germany, and he couldn’t stomach the taste or smell of any sheep-family product, even the mildest lamb, for many years. (He has since lifted the lamb ban.)

So, when I saw that Evelyn Pereira of Terra Nossa Farms was selling mutton at her stall at the Moss St Market last fall, I was naturally feeling cautious. Especially when she made no bones about telling me that this mutton was the Real Deal: two-year old ewes, sent to slaughter. It sounded like my father’s nightmare from childhood. BUT all of the Terra Nossa-raised meat that  I have ever tried has been FABULOUS, so I bought a pound each of ground mutton and stewing mutton to try.

All you need to know about the success of this experiment is that I went back to the Market two weeks later to buy 15 more pounds of mutton. Seriously, it was so good. Mild as lamb, but with a flavour and richness I can’t rightly describe. It made the best Shepherd’s Pie and the best lamb tagine I have ever cooked. If you have the opportunity, please give some Terra Nossa mutton  a try. In the meantime, my tagine will taste almost as good with an equal weight of lamb shoulder, cubed. 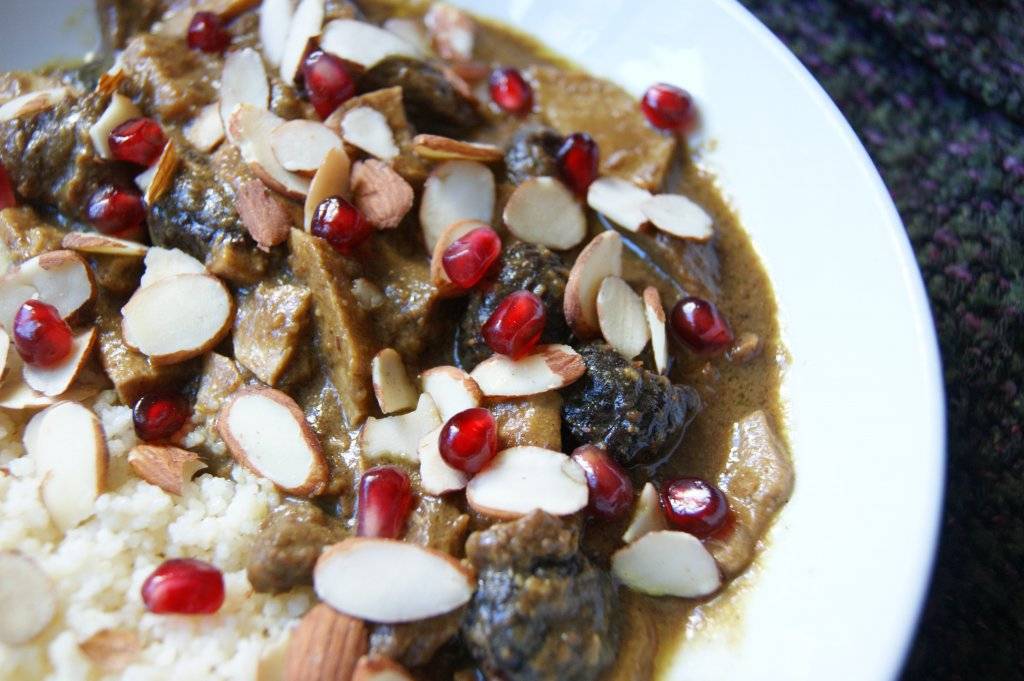 Now, to make a tagine, you do not need to own a tagine pot. No, you can make this in any old stewing pot, Dutch oven, or soup pot that you have kicking around, provided that it has a heavy bottom and a tight-fitting lid. Tagine pots look very nice, but they do not do anything special that a regular pot can’t also accomplish.
(Many Moroccan cookbook authors would have you believe that the conical shape of a tagine lid provides some magical type of aroma-capturing condensation. No, guys, just no. ANY lid will do the same! The conical shape of the tagine lid makes it so that the cook can take off the lid without burning their hand. That’s it. However, if you have a tagine, by all means, use it! It looks beautiful, especially for service.)

The other crazy ingredient called for in this recipe (oh, will it never end?) is quince. I have previously waxed poetic about quince here. Sadly, quince season has come and gone, so I have suggested pears or apples as a substitute. This is were the ‘unfinished’ aspect of this recipe comes in. I have yet to make it with either pears or apples, so I don’t know how long they will need to cook. I do know that the quince took almost three times as long to cook in the tagine as they do in a bit of water, so I would assume the same goes for apples and pears, but I don’t know for sure. Feedback, please!

Otherwise, this recipe is delicious. Tender chunks of lamb (or mutton) in a heavenly spiced gravy, with slightly sweet-tart fruit as a perfect complement. I served this with fluffy couscous and a sprinkling of sliced almonds and/or pomegranate seeds. You could also eat it as is, sopped up with a bit of warm bread, as is traditional in Morocco. One thing I learned from my trip there is that couscous and tagine are served at separate meals. But we can break the rules over here, I say. 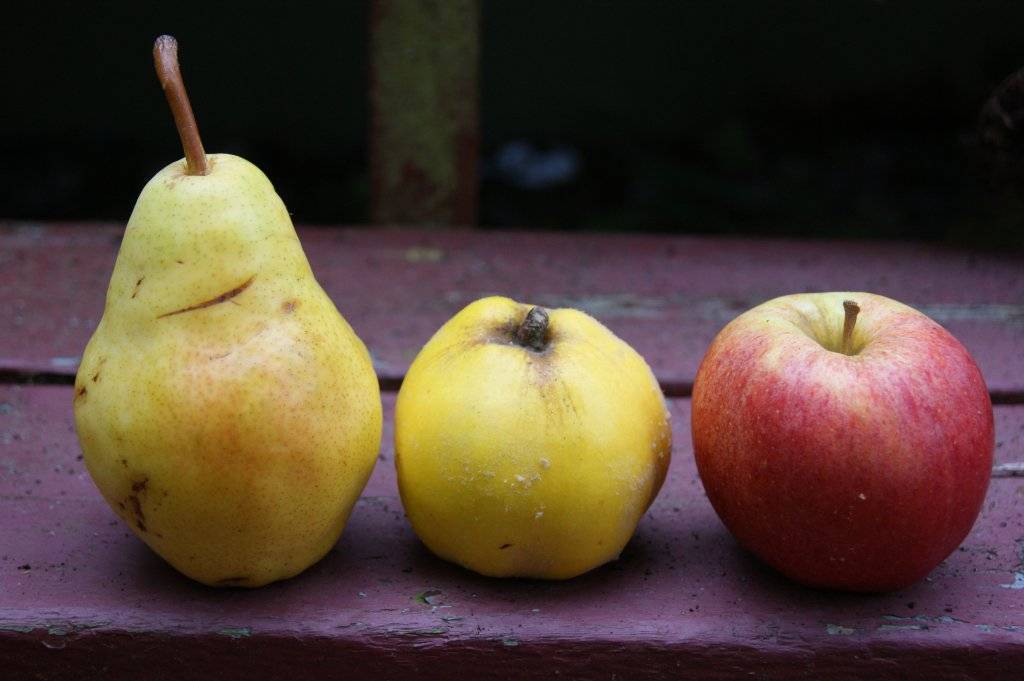 Now, ON TO THE COOKING CLASS DISCOUNT GIVEAWAY, am I right?!

My friends, fans, and loyal blog readers, Rancho Vignola has stepped up once again to sponsor my business activities, this time by covering 50% of the cost of one of my Moroccan cooking classes. What this means for you, dear readers, is that I will be selling twelve spots at a Moroccan cooking class for half-price! That’s $45 for a full three-hour hands-on cooking class, and includes a take-home recipe booklet and full delicious meal.

The class will be held on Sunday, February 16th, from 5 pm to 8 pm, at the lovely teaching kitchen of The London Chef in downtown Victoria. For a full description of the class, please visit my website cooking class page (scroll down a bit for the “Delights of Morocco” description.)

The folks at Rancho and I hummed and hawed for a long time about the best way to go about this discount. The initial idea was to give away a few spots in the class on the blog, and make everyone else pay, but that didn’t seem fair. In the end, we decided to spread the sponsorship out evenly, so that every spot in the class costs the same. So what is being given away here is the 50% discount. You are entering to win a Chef Heidi cooking class, normally valued at $90, for only $45. It’s not like any give-away I’ve ever seen before, but I’m going to try it.

Bonus: Rancho will be providing some of their new-crop nuts and dried fruits for our class menu!

1. You are entering to win a discount on a Chef Heidi cooking class. Her classes are normally valued at $90. Draw winners will pay only $45.

2. No purchase necessary to enter the draw, but if you win the discount, you will be expected to pay the remaining 50% value of the cost of the cooking class – in this case, $45 plus GST per person.

3. Two discounted cooking class spots will be available for a draw each Thursday and Monday for the next three weeks. That means there are 6 chances to win!

4. Enter the draw by commenting on the blog post or on my facebook fanpage that day. A new blog post will go up every Monday and Thursday for the next three weeks. Each draw will last for 24 hours, after which I will close comments and pick a winner by random draw. (I’ll let this first one go over by a couple of hours to let any blog subscribers get a chance to comment).

5. The winner will have the choice to buy both discounted spots, OR to buy only one spot, and I will pick a second winner by random draw.

6. This discount giveaway is open to any Canadian or U.S. resident who can make it to Victoria for the date of the class (Feb 16th, 2013).

7. This discount cannot be applied to any other cooking class. It applies only to the Rancho Vignola sponsored Moroccan cooking class offered Feb 16th, 2013.

PHEW! Now that that’s all over and explained, let me just give you that recipe. And don’t forget to post your comments here or over on my facebook fanpage for your chance to WIN the discount! 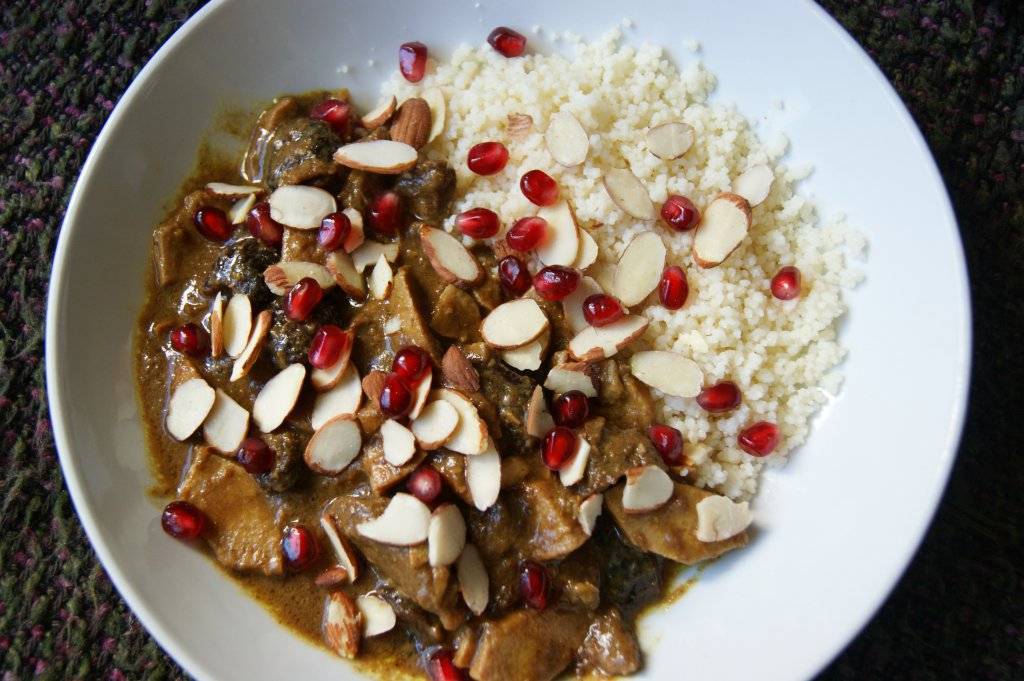 MOROCCAN LAMB TAGINE WITH QUINCE OR PEAR
Serves 6 to 8
I love this recipe with Terra Nossa mutton, but it is equally delicious with cubes lamb shoulder. The recipe is adapted from one I was taught to make by a Moroccan chef in Morocco. It can be made in either a tagine or a heavy pot with a tight-fitting lid.

instructions
Mix the spices together in a small bowl. Have all your ingredients chopped and ready to go.

In a large saucepan or medium pot with a tight-fitting lid, heat the olive oil until just barley shimmering. Add onion and saute gently for about 7 minutes, until translucent. Add garlic and spice mixture and saute briefly, 10 to 15 seconds, until just aromatic. Add the chicken broth, water, and mutton (or lamb). Bring to a boil, reduce heat to lowest setting, cover, and simmer gently 1-1/2 hours.

Add quince (or pear), and simmer gently, covered for 15 to 40 minutes. (15 minutes for pear, 40 for quince). Remove pan from heat just while doing the next step.

Scoop out as much of the liquid as you can and transfer it to a small pot. Add the dried cherries or prunes, the butter, the honey, and the cinnamon. Bring to a boil, reduce heat partially, and simmer vigorously for 2 to 3 minutes. Scrape contents of this pot back into the lamb mixture, return it to the heat, and simmer gently to meld the flavours, about 10 minutes more.

Serve immediately with warm bread or couscous. Decorate the tagine with pomegranate seeds or toasted almonds, if desired.

Tagine can be made up to 4 days ahead an reheated before serving. 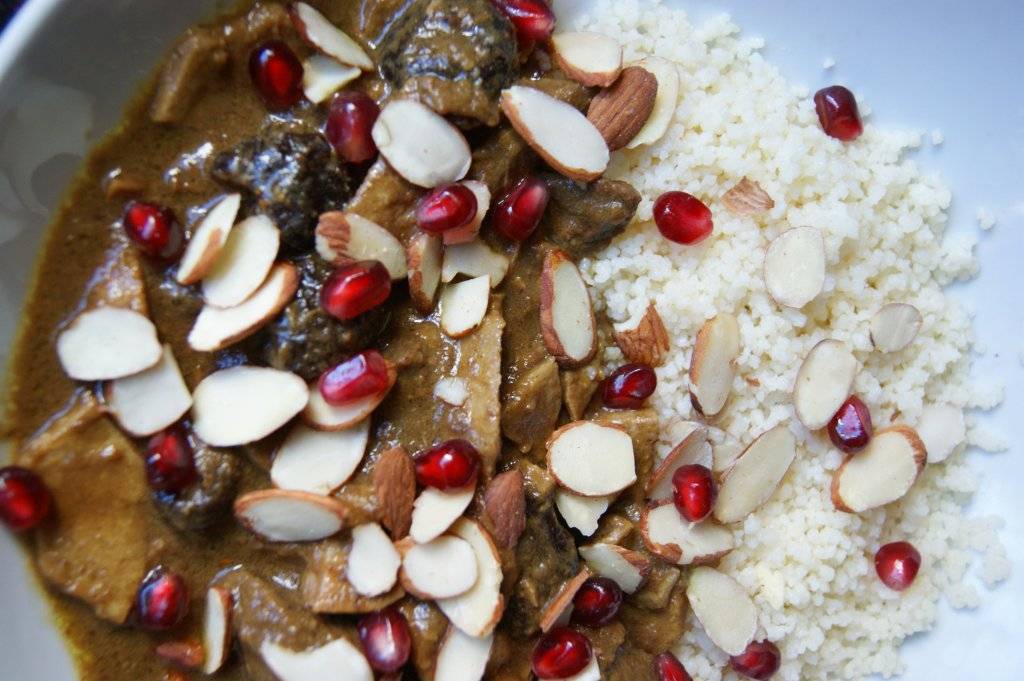